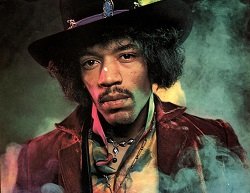 This is the third part in my ‘Breaking Down the Blues’ series. In part one, I went through the blues progression, common variations of it, and how to put it together in any key you want. Part two covered the blues scale, it’s most common patterns on the neck of the guitar, and how to position it to fit the key of the progression you are playing over.

In this part, I’m going to go through a handful of blues licks. This is to give you some general ideas of how to actually use the blues scale when playing, and to add some licks to your ‘bag of tricks.’

All of these licks will be using the extended box pattern of the A blues scale, which I covered in part 2 of this series. Here’s a diagram showing where the notes for this scale pattern are on the neck of the guitar (black circles=root note, boxes=blues note, white circles=minor pentatonic notes):

So, lets dive in and have a look at the first lick.

For each of these licks, I’ll show them in TAB form, as well as a quick video of me playing them at two speeds. Here’s the video and TAB of lick 1: This lick starts with something I really like doing: making a quick run up the scale, followed by a long, dramatic bend. I start off making a run up the Albert King Box segment of the blues scale. After that, I do a full bend off the highest note in the Albert King Box. A full bend means I’m bending that note so it sounds like the note that’s 2 frets above it. While the note is bent, I give it just a little bit of vibrato. After that, I do a quick full bend and release off the same note, immediately followed by a pull off down to the 8th fret. Then, I come back up to the 10th fret, and then play the 8th fret where I do a ¼ bend. A ¼ bend is just a very small bend that pushes the note slightly out of tune.

Lick 2 is another bend oriented lick that I really like. I first learned this one from a Jimmy Herring solo that I transcribed. It’s based in the A blues box pattern, which spans the 5th to 8th frets. I start by doing a full bend on the 8th fret. Immediately after that, I do a slower ½ bend on the same fret. A ½ bend means I’m bending the note until it sounds like the note that is one fret above it. After the bends, I make a fast run down the scale, skipping the blues notes. To achieve a smooth, legato sound as well as to make the run easier, I do a few pull offs along the way. I finish by playing the root note of the scale a couple of times.

The third lick is centered around the lower end of the extended box pattern. It starts on the 3rd fret of the 6th string, the lowest note in the pattern. It ascends a few notes, after which a ½ bend happens on the 5th fret of the 5th string. Again, a ½ bend means the note is being bent to sound like the note that is one fret above it. In this case, the note that I’m bending to is the blues note of the scale. I then do a quick release of the bend and a pull off to the 3rd fret, much like we saw in lick 1. Bend/pull off combinations like this are very common in lead guitar playing. After the pull off, I do a slide from the 5th fret of the 5th string up to the 7th fret. I finish the lick by going up a couple strings from there, and end on the 5th fret of the 3rd string.

Lick 4 is based around an Am7 arpeggio, with notes from the box pattern of the A blues scale. I start off on a note that is actually not in the scale, the 6th fret of the 4th string. I quickly slide up to the next fret above it, which is a note in the scale (the root note, to be exact). Making small slides like this from non-scale notes to notes that are in the scale is a nice way to add some spice to the line you’re playing. I then proceed to play the next three notes, which complete the Am7 arpeggio. An arpeggio is when you play the notes from a chord one at a time. After that, I do another one of those small slides from a non scale note. This time, its from the 6th fret of the 3rd string (non-scale note) to the 7th fret (scale note). I then descend a couple of notes in the scale, and finish on the the root note, giving it a little vibrato.

This lick gets your attention right at the beginning with the combination of a rake and a double stop. A rake means you play a couple muted strings with your pick as it is on its way to picking a note. A double stop is when you play two notes at once, like a small chord. As you can see in the video and tab, I start with playing a double stop on the first and second strings on the 5th fret. As I am going in to pick those notes, I also catch the 4th and 3rd strings, which I’ve muted with the 3rd finger of my left hand. The effect of a rake is to make a louder, more intense sounding pick attack, and it’s a common device used in blues and rock lead guitar playing. Double stops also tend to sound louder and more intense since two notes are being played at once. After the double stop, I descend down the box pattern of the A blues scale, skipping the blues note. Once I arrive at the note just below the blues note, I slide up to the blues note and then back off from it. I then finish on the 5th fret of the 3rd string.