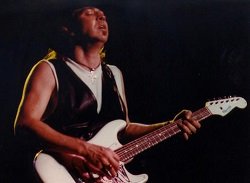 This is the first part in a series where I will go through the basic aspects of playing blues on the guitar. It’s a good idea to have some idea of how playing the blues works as a guitarist. Pretty much all contemporary, popular styles of music have evolved from the blues. Learning the structure of the blues can lead to insights into other styles of music, as well as giving you things to play that can serve as common ground when you get together to jam with other people.

The blues is a relatively simple style of music. Granted, musicians can still spend years or even decades delving into the rich history of the blues. But, the complexity often lies in the subtle nuances of playing this music. Learning the more basic structural aspects of the style isn’t too difficult or complicated.

This series will start off with beginner guitarists in mind. I’ll assume the reader has little to no knowledge of chords and scales on the guitar, and I’ll keep explanations of things as simple as possible. The goal is for a beginner guitarist to learn some basic things that will enable them to participate in this style of music.

Most blues songs are structured around the blues progression. The progression will happen over and over again, while singing or soloing takes place over the chords.

Here is an example of the blues progression in the key of E:

As you can see, it’s made of just three chords: E7, A7 and B7. These chords are all examples of Dominant 7th Chords. These types of chords are indicated by having a 7 in the chord name, and have a somewhat twangy and jagged sound to them. It’s common for the chords in the blues progression to be dominant 7th chords. In case you don’t know these 3 chords, here are some common and easy ways to play them:

To play through this chord progression you would just have to come up with a strumming pattern of some sort that is 4 beats long, and apply it to each measure in the progression. There are almost countless different ways you could strum through this progression.

The Progression in Other Keys

It’s easy to figure out how the progression will work in keys other than E. First, we’ll need to take a step back and look as a few basic things.

In any key, there is a group of seven different chords that are the chords for that key. When people analyze chord progressions in music, these chords are given roman numerals (I through vii). The blues progression uses chords I, IV and V of the key you are in. In the key of E, the I chord is E7, the IV chord is A7, and the V chord is B7. The I chord shares the same letter as the key itself (an E7 chord when we’re in the key of E).

Chords IV and V are always going to be a certain distance from I. You can easily see this distance on the fretboard of the guitar. If you find the root note of your I chord on the 6th string, the IV and V chords will always be found in the same place relative to where your I chord is found:

Doing this will require that you know (or are able to figure out) the notes on the 6th and 5th strings of the guitar. This is something that is generally good to know, even as a beginner. If you need a reference for this, here is a diagram showing the notes on these strings:

As long as you are straight on where the notes are, all you need to do is find the root of your I chord on the 6th string, and the roots for IV and V will be right underneath it as shown above. For example, if we look back at our chords in the key of E, you can see that an E note is on the open 6th string. The A note (IV) is right below it on the open 5th string. B (V) is just 2 frets up from the A. Once you find your root notes, just make them in to Dominant 7th Chords (E7, A7, B7 in this case) and you’re ready to go.

Now we just need to figure out how to put them together into the 12 bar progression. Looking back at our 12 bar blues progression in E, we could look at it another way with roman numerals in place of the E7, A7 and B7 chords:

This will be your formula for putting the progression together in any other key. Let’s take the chords we figured out for the key of G and plug them in:

And there you have it, the 12 bar blues in G. You can figure out the progression in any other key by following the same steps:

Common Variations of the Progression

It’s good to be aware of some of the common variations in the blues progression. Usually within any given blues song, the chord progression will stay the same as it occurs over and over again. But, from one song to the next there might be some slight differences in the progression. Here are a few of the most common variations.

First, there is a more simplified version of the progression that leaves out the IV chord in the 10th measure and replaces it with another measure of the V chord. Also, the V chord in the very last measure is replaced by the I chord. This progression is typical for fast blues rock songs. The full progression would look like this:

There is also what is called the ‘quick change’, where you have the IV chord in the 2nd measure:

This sums up how the blues progression is put together. In the next part in this series, I’ll go over the blues scale, the most commonly used patterns for it, and how to move it around the neck of the guitar for playing in different keys. Articles after that will focus on things like turnarounds, riffs you can do in place of the chords in the blues progression, and common blues standards.