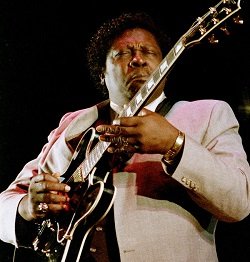 What is the Blues Scale?

First of all, what is a scale in general? It can be hard to really lock down a definition for this, but I consider a scale to be a collection of notes that share a certain relationship with each other and with a set of chords that they are being played over.

The blues scale takes the notes from the minor pentatonic scale and adds one more note to it, called the blues note. The blues note is actually a note that doesn’t quite belong in the scale from a music theory stand point, and it clashes a bit with the other notes. This clash is what produces the rough, twangy quality that blues music has.

So, overall the blues scale is a 6 note scale that takes the 5 notes from the minor pentatonic scale and adds the blues note to it. The first of those 6 notes is called the root note, which will be included in the name of the scale.

Scale Patterns on the Guitar

On the guitar, those 6 notes will occur repeatedly, spreading out over the entire fretboard. Here is a picture of the notes in the A blues scale spread out over the first 12 frets on the neck of the guitar:

The notes that are black circles are the root note of the scale (A). The white circles are the other 4 notes from the minor pentatonic scale (C, D, E and G). The boxes are the blues note (D#).

The most commonly used part of this scale is what I call the box pattern. This is the part of the scale that is in the 5th to 8th fret area.

Here is the box pattern, isolated from the rest of the scale:

The second most commonly used portion of the scale is the Albert King box, as shown here:

The Albert King Box forms a nice extension past the box pattern if you are looking to take the line you are playing into a slightly higher register.

If you are playing in the box pattern and you want to extend into a lower register, you can add some bass notes from the scale a little lower on the neck. When combining this with the Albert King box, you are left with an extended box pattern:

So, I would recommend learning the box pattern first, followed by these extensions. You can really do a lot with these patterns and some of the early blues guitarists only knew these portions of the blues scale.

Once you’re comfortable with these areas of the scale and you’re ready to move on, you can begin learning the rest of the scale notes up and down the neck. For the sake of keeping this article somewhat short and simple, I’m just going to focus on the extended box pattern.

The Scale in Other Keys

So far, we’ve focused on the A blues scale. How would this work if we wanted to play in a different key and use, say, the C blues scale or the E blues scale?

Luckily, this is really simple on the guitar. It boils down to just moving the scale pattern to another place on the fretboard in order to play in another key.

This process is somewhat similar to figuring out the blues progression in another key, which I described in the first article in this series. You first have to be able to find your root note on the 6th string. Here is a diagram of the notes on the 6th and 5th strings, for reference:

We have 3 root notes: one on the 6th string, one on the 4th string, and one on the 1st string. To make things easier, we can just focus on the root note on the 6th string. To play this scale in another key, you simply have to move the pattern so its root note is positioned on the note you want. For instance, to play the G blues scale, you would move the pattern to the 3rd fret so that the root note is on a G. As long as your root on the 6th string is where you want it, the other root notes will fall into place too. No matter where you move the scale, you can add the extensions to it. Here is the G blues scale with the extensions added:

How to Use the Blues Scale

But people often ask, what do I do with this? How do I use this? Well, the answer is you can do whatever you want with it. The blues scale provides you with a selection of notes that you know will sound good with the chords you are playing over. You can use those notes in any way you want to create musical ideas and melodies in a creative way. The lines you play don’t have to start or end in any particular place in the scale. You don’t have to play the notes in any specific order either. Just experiment and see what sounds good to you.

Learning licks and solos from other guitarists that you like is an important part of the process of building a sense of how to use this scale musically. Through learning, copying, and making your own variations of other people’s ideas, you’ll start to develop a sense of vocabulary, or a collection of ideas and phrases you can use while soloing. I’m going to devote another upcoming article on this, where I’ll show some licks that I really like playing when I solo.

Stay tuned for more in this series. In other upcoming articles, I’ll talk about turnarounds, riffs you can do in place of the chords in the blues progression, licks that are based on the extended box pattern of the blues scale, and famous blues songs.