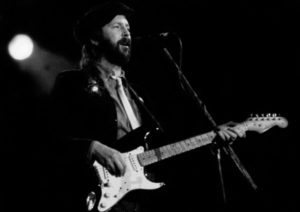 This is the fifth part in my series on the system behind playing the blues on the guitar. In this part, I’ll talk about the role that the major pentatonic and major blues scales play when soloing over a blues progression.

The other parts in the Breaking Down the Blues series are:

I’ll be referencing parts 1 and 2 a lot in this article. If you’re unfamiliar with what those articles talked about, go ahead and read them first. 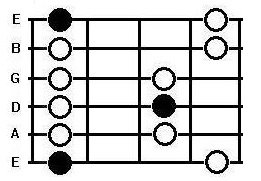 The black circles in the pattern are the root note. The white circles are the other notes in the minor pentatonic scale.

Now, here’s where it gets a little strange for some people. To transform this scale into the major pentatonic scale, you just have to think of a different note as being the root note, like this (for a more thorough description on moving scales based on root notes, see part 2): 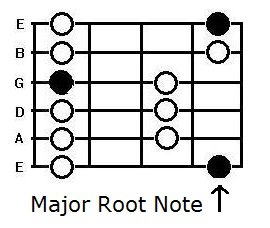 You can see that his is exactly the same pattern of notes, but the black/root notes are in a different place. I don’t want to delve too much into the theory behind this right now, but if you’re curious you could read up on relative major and minor scales. 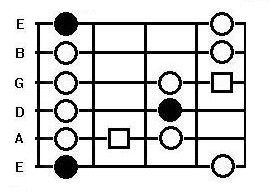 To make this into the major blues scale, we just have to think of a different note as being the root note, just like with the major pentatonic scale. The blues notes will be unaffected by this. 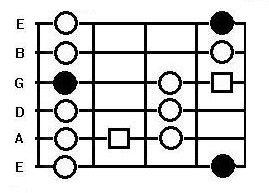 To hopefully clarify this further, let’s look at this from another angle. Let’s say you are playing over a blues progression in the key of A, and you wanted to solo using the A minor blues scale. You would position the box pattern of the blues scale so that the minor root note is on an A note, as shown below:

Then, let’s say that you wanted to use the A major blues scale. You could just move the same pattern of notes down to the 2nd fret, which would put the major root note on an A note, like this:

To make this into the extended box pattern of the major blues scale, you again just have to think of the root notes differently in the same way that I have already described:

When to Use the Major Blues Scale

I find that the minor blues scale works pretty well over any chord in the blues progression. The major blues scale, on the other hand, works better over some chords than others. The major blues scale sounds great when used over the I chord. It sounds OK over the V chord, and can possibly sound not so great over the IV chord (if you’re confused about what I mean by these roman numerals, read through part 1 again).

You just have to be careful with the IV chord. Lots of the notes in the major blues scale will sound fine over it, but there are a couple that will clash with the chord in an unappealing way. I personally prefer to use the minor blues scale over IV.

Understanding these concepts and actually using them can be two different things. To help you get an even better idea of how the interplay between the major and minor blues scales can take place in a solo, I’m going to quickly follow up on this post with an ‘example’ solo, with an in depth article breaking down what’s happening in it.

I had originally planned on including an example solo with this article. But, I then realized that to give it a good amount of explanation would push this article way too long.

So, keep a look out for my next post, which will feature a video recording and tab of a blues solo using the major and minor blues scales. I’ll give a phrase by phrase break down of what is happening in the note choices I made, as well as talking about some other things like phrasing and building up tension within a solo. It should be up in a couple weeks.