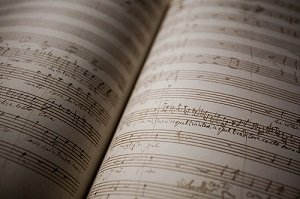 I’ve always found the act of composing to be one of the most difficult and complex activities in music. When composing, I feel that I’m calling upon everything that I am–not only as a musician, but as a person.

There was a time when I felt I just wasn’t good at composing, or that I wasn’t enough of a creative person to do it well. Despite that, I wanted to write music so I always tried. In more recent years I feel that I’ve gotten better at it, and feel a greater sense of confidence when writing. I’ve come to understand some things that I do differently now which make the process easier.

This post is just meant to be a handful of thoughts or realizations I’ve had about writing music. It’s not some sort of step by step ‘how to’ article. I don’t think such an article could genuinely be written. It’s also not meant to imply that these things are true for everyone. Different people have different processes for writing. What it is meant to do is offer some possibly helpful suggestions to those who struggle with writing.

Like anything else, writing music takes practice. The way to practice it is by doing it, no more no less. Unlike technique, scales, ear training, or learning other people’s songs, there aren’t any ways to break down the process of writing and practice it in some sort of a logical way. But simply by sitting down with your guitar and spending time composing, you’ll be refining the mental processes that are needed to compose. And, you’ll gradually start to tap into what your own creative style or voice is.

The Role of Intuition

When I’m writing music, there are usually anywhere from 5 to 20 ideas that are started and then abandoned for each idea that ends up being used in a song. When exploring where to take a piece of music when it goes from one part to the next, there are almost endless possibilities. I usually cycle through experimenting with different melodic, rhythmic and/or chordal ideas quickly and, along the way, I pay attention to my own reaction to each one. For most, my reaction is either ‘not going to work’ or ‘meh’ or ‘maybe.’

Eventually, I come across an idea that feels different. Suddenly, instead of the negative or neutral feelings I was having, I’ll feel something more like ‘that’s cool!’ That’s when I know that I’ve found the part I was looking for, at which point I’ll go to work refining it and then integrating it with the other parts of the song.

I’ve learned to be patient and wait for that feeling, which I think is a key difference from the way I used to be. Before, when I struggled more with writing, I would get frustrated after exploring just a few possible ideas that didn’t appeal to me, start thinking how I wasn’t good at writing, and then stop. Now I just keep searching, knowing that eventually the right thing will come to me.

Where the Song Wants to Go

This one is somewhat related to the ‘intuition’ section above. It might seem a bit esoteric, but I believe that every song has a life of its own. If you’re in the middle of composing a song and are considering which direction to go with it, you should stop and think about what the song itself is asking for.

Spend some time thinking about the song. Listen to it in your imagination and, when you reach the point under consideration, see where your mind goes with it. Try out different scenarios, and see what seems to work best.

Ask yourself these questions: is the song going in the direction of having a rise in the dynamic/volume/energy level, or a decrease? Is it asking for the next section to have more open space, or a busier sound? Does it want the next section to be more syncopated, less, or the same? I often think in terms of rhythm and dynamic levels when doing this.

Thinking about things like this can help when you sit back down with the guitar to continue writing. Even if you couldn’t hear a specific riff or melodic phrase, just knowing what general direction the song is heading can help structure the writing. Or, maybe the momentum of the song was strong enough to where you could hear a specific part. That’s even better, in which case just go to work trying to figure out what you’re hearing in your head.

The Need to be Completely Original

Recently when talking about writing music with a student of mine, he mentioned how he has trouble coming up with things that don’t sound similar to another artist. He couldn’t seem to come up with something that hasn’t been done before.

This is an understandable but destructive mindset to have, and I can remember feeling it myself at one point. It can easily paralyze you and cause you to abandon otherwise good ideas.

Of course, all the great artists out there have an original sound that, to a fan, is instantly recognizable. That originality is a big part of what makes them great. What developing songwriter wouldn’t want that?

Also, if you go back and listen to early recordings of most artists (like early demos that were made before they even cut their first album), a lot of the time that original sound isn’t there as strongly as it is now. It developed through years of that artist honing their craft (hence the ‘practice’ section earlier in this article).

So, my advice is to simply not worry about originality when writing. Don’t purposefully rip off another song of course, but don’t be thinking about how (un)original your sound is when you’re in the act of writing. It’ll cause you to think way too hard about everything you’re doing. Just come up with stuff that you think sounds cool. The originality will come on its own in time.

Theory: Not Necessary, but Helpful

I’d be lying if I said theory doesn’t play a role when I’m writing music. Yet, I’ve seen people with little or no theory knowledge write some pretty cool stuff. If you don’t know any theory, it’s no reason to put of starting to write. Again, writing music well takes practice, so you might as well start now. At the same time, any theory knowledge you can pick up will help the process along if you use it right.

My own use of theory when writing is closely intertwined with the intuitive processes that I’ve described. Sometimes it’s related to experimenting with different possible parts for a song (“how would it sound to go to the III chord here? Oh, not good. Maybe the VI chord?”) Other times I’ll explain to myself in theory terms what I’m imagining in an upcoming part for a song (“sounds like the last section should modulate up to a different key,” or, “that first chord should have a 7th in it.”)

The difference between this process and that of someone who doesn’t know any theory is they would have to completely rely on their ears. They can still experiment, or imagine upcoming parts, but they don’t have a framework to help guide them to the sounds they are searching for. They have to just go in and find them, note by note, with their ears. It’s similar to a blind person feeling around for an item they are searching for. They’ll still find it, but with more time and effort than someone who can both see and feel.

By using theory in this way, it becomes an aid to creativity rather than a substitute for it. The imaginative/intuitive process take precedent to it, after which theory is used to find that which was being imagined. Music becomes bland and theoretical when that system is reversed, and theory is used as the main creative source.

Get New Posts Via Email!