The web is bursting with resources for the aspiring (and experienced) guitarist. A quick web search for any guitar related topic will return a trove of sites. There are a handful or sites and resources out there that I’ve found to be particularly useful for both developing as a guitarist and for teaching. So, I thought I’d share them.

While there are plenty of paid resources on the web that are good and worth the cost, for this article I’m sticking to resources that are currently free to use. 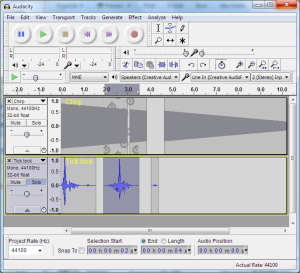 Audacity is a free, open source audio recording and editing program. I have other software that I usually use for recording, but Audacity is useful for more than just making recordings. It can also be used to slow down audio recordings without affecting the pitch of the music. This is incredibly useful for transcribing songs as well as practicing.

Another thing I sometimes use Audacity for is recording audio that is streamed from a website. For example, let’s say I want to transcribe a solo from a recording that I don’t own. I can go on Youtube, pull up the song and play the section that I want to transcribe. While it’s playing, I’ll record it in Audacity and then go back and slow it down (using Audacity or another program) to transcribe it. 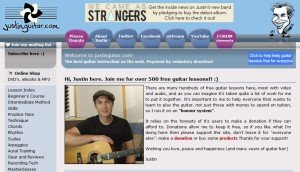 There is a huge amount of information on Justin Sandercoe’s site. Theory, song lessons, ear training, philosophical articles, you name it. Out of all the sites out there with a bunch of different kinds of lessons, Justin Guitar is probably the most thorough and well organized.

If you’re learning a song, it can be both fun and a good learning experience to try playing it along with a backing track. Guitar Backing Tracks has a ton of backing track versions of songs available to download for free in mp3 format. Most of them have the guitar and/or vocals left out so you can hear yourself better while playing along. Hint: use the backing tracks with Audacity to slow them down while you’re still learning the song, and gradually raise the speed. This a great way to get the kinks worked out in a new song you’re learning. 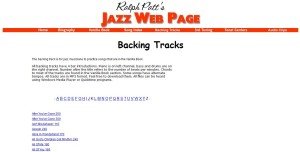 If you’re an aspiring jazz musician, playing along with backing tracks should be part of your practice routine. Guitar Backing Tracks is great for rock and pop songs, but they don’t have that many jazz standards to choose from. Ralph Patt has made a lot of backing tracks for jazz tunes and put them up as free mp3 downloads on his site. They’re obviously midi based, but still good enough to use for practicing. For better quality jazz backing tracks, check out Jamey Aebersold’s series of books and CD’s. 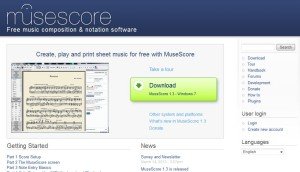 Musescore is a free, open source program for creating scores and music charts. I use it to make charts for original jazz tunes I write or unique arrangements of cover songs my band does. I’ve found it easy to use, with quality that rivals similar programs like Finale of Sibelius which cost money. Here is an example of a chart I made using Musescore:

Unfortunately, you can’t yet make guitar TAB on Musescore, it only operates in standard music notation. But, the upcoming release of Musescore 2.0 will include guitar tab. I certainly intend to make use of that as soon as it comes out. 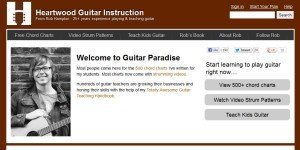 This is the website of Rob Hampton, a guitar teacher in Seattle. He’s put a bunch of chord charts for songs up on his site. Whereas most sites with lots of Tabs and chord charts can be really hit and miss for their accuracy, I’ve found the charts at Heartwood Guitar to be pretty accurate for the most part. They are also presented in a way that is clear, easy to read, simple, and informative. 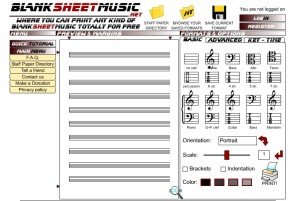 This is my go to site for printing off blank TAB paper and staff paper. It’s fast, easy to use, and you have a lot of control over how your TAB/staff paper looks once printed off. 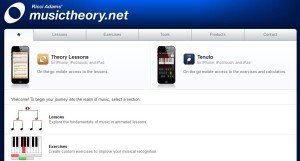 This site is great not just for learning music theory, but quizzing yourself to get a faster working knowledge of it. I’ve found the interval ear trainer particularly useful. I first used it to learn the basics of recognizing musical intervals by ear while preparing to start music school, and I’ve used it since then to help students of mine who are getting started with ear training. There are a number of other trainers on the site for various elements of theory fundamentals and ear training.