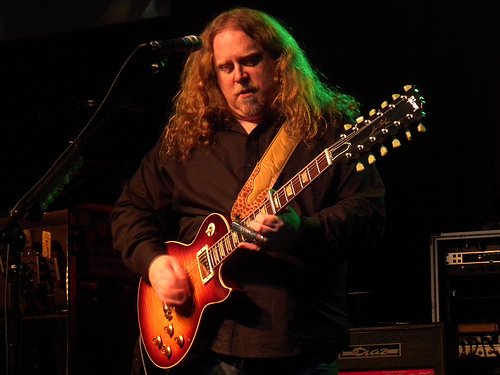 This is the fourth part in my ‘Breaking Down the Blues’ series. In the previous parts, I covered the 12 bar blues progression, the extended box pattern of the blues scale, and I demonstrated some blues licks. Here are links to the previous parts:

There are also a few differences, which I’ll talk about below. I’ll also demonstrate how to put the progression together in a couple different keys, and go over some blues tunes that use this progression.

The i, iv, and v chords will all be minor 7th chords, and are therefore indicated by lower case roman numerals. The V chord will be a dominant 7th chord, which is the same type of chord used for all the chords in the major blues progression. The key of the the chord progression will determine exactly which chords will be used.

I’ll start by showing the progression in the key of A minor:

Then, just build the chords you need off those root notes using some movable chord shapes. There are many ways you could do these chords, but here are some movable chords I like to use in this type of situation:

You just need to position these chords so that their root notes (indicated by the circle with an R in it) are on the notes I diagrammed above. To do these chords specifically as Am7, Dm7, Em7 and E7, they would be like this:

For an example of doing this in another key, lets put together the progression in G minor. First, let’s find the root notes of our chords:

Let’s plug them in to our 12 bar progression:

And there you have it, the G minor blues progression.

The progression is exactly the same as form 1 except for the 9th and 10th bars, where we now have the VI chord going to V. Locating the VI chord is easy: its root note will just be a half step above V. Here’s a diagram showing where it would be if we were in the key of A minor:

If we were to put the progression together in G minor, our VI chord would be Eb7, and therefore our progression and chords would be this:

Scales and Soloing Over the Progression

When it comes to soloing over both forms of the minor blues progression, there are a number of choices available to you. An advanced guitarist taking more of a jazz approach to soloing over this progression might use a handful of modal scales, as well as some usage of the harmonic or melodic minor scale. Regardless of the approach or style that is being used, the blues scale would feature heavily in any guitarist’s scale choice, and it can sound great even if it’s the only scale used.

To wrap things up, I thought I’d list out some songs that use the minor blues progression. This progression can be found in many styles of music. Obviously it’s often found in blues songs, but you’ll see it at least occasionally in rock, funk, soul, and jazz as well.

A couple rock songs that use the progression are:

Some blues tunes you’ll hear it in: