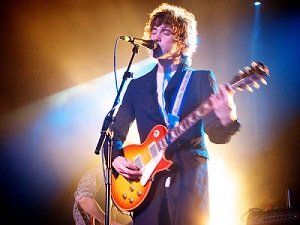 Being able to sing while playing the guitar is a great skill to have. In fact, I’d say that having at least a basic ability to sing while strumming chords is a skill that any experienced guitarist should have. Learning to do it is tricky at first, though. It involves developing some basic pitch control in your voice while also being able to play two independent rhythms (one on the guitar, the other in the vocal line).

This article outlines some ways that you can work on the ability to sing and play the guitar at the same time.

Be really comfortable with just playing

If you are still in the process of learning how to strum chords and developing some basic rhythm abilities, I’d recommend not delving into learning how to sing while playing yet. You’ll want to be really comfortable with strumming your basic open chords before attempting to add another somewhat complicated activity to the mix.

Choose an easy song to learn at first

Make sure you don’t choose a song that is too difficult for your first attempt at learning to sing while playing the guitar. Choose a song that has a simple guitar part and a simple vocal part. The guitar part should have just a handful of simple chords and nothing too rhythmically complicated. The vocal part should be a simple, repetitive line that is well within your vocal range and doesn’t have any wide leaps between notes.

Find the right notes to sing on the guitar

Once you’ve chosen your song, go to work figuring out the notes you’ll need to sing. Put on a recording of the song and isolate just one line from the verse or chorus. One by one, figure out the notes that the singer is singing by finding them on the guitar. Write this down if necessary.

I’ve seen some students who have enough of a natural, intuitive feel for singing that they can figure out all the notes needed on their own after finding just the first one or two notes on the guitar. Other students without such a natural feel for singing might have to figure out every note one by one on the guitar. There’s nothing wrong with that, you should do whatever is necessary to get the right pitch for the notes you’re going to sing.

Once you’ve figured out the notes, start to practice singing them. You’ll need to take it slow at first if you’re new to singing and really concentrate on matching your voice to the note you’re hearing on the guitar. Play the first note, then sing it. Then play the second note and sing it, and so on. Do this as many times as you need to in order to start feeling comfortable with the notes you’re singing.

Next, you need to work on anticipating the notes before you play them. Start by playing the first note and singing it, but then try to find the next note with your voice without hearing it from the guitar first. Once you’ve sung the note, check yourself on the guitar. Continue doing this until you feel like you can anticipate the notes as you go along.

Once you’re able to sing the right notes most of the time without hearing them first on the guitar, you’re ready to start putting the guitar chords together with the vocal part.

If you’ve ever tried to sing and play at the same time, you probably realized just how hard it is to juggle the contrasting rhythms in the guitar and vocal parts. Because of this, it’s important to simplify the rhythm in the guitar part while you’re first starting to get a handle on singing and playing. I’d suggest building the guitar part up in the following series of steps:

The first step is to try and sing the right notes while giving just one strum to each chord that will be played underneath the vocal part. Don’t worry about keeping a strict sense of timing while doing this. Just get a feel for moving your fingers from chord to chord, and hearing the chords, while you’re singing the vocal part.

Step 2: 1 strum per chord with a tempo

Once you’re comfortable with step 1, the next step is to do basically the same thing but with a sense of timing. So, you’ll still strum each chord 1 time while you’re singing , but keep a strict awareness of how many beats are going by while doing this. Use a metronome or tap your foot to try and keep time.

The chords might last anywhere from 8 beats to 4, 2, or even 1 beat depending on how the song goes. Hopefully, if you chose a simple song to do this with for your first time, you won’t have chords changing too frequently.

Step 3: 1 strum per beat on each chord

Next, you’ll need to make the guitar strumming more consistent while still keeping it simple. Start doing strums lasting 1 beat each. The number of strums you do on each chord depends on how many beats that chord lasts.

At this point (or sooner) you’ll likely be encountering some tough spots where you lose the rhythm on either the guitar or vocal part, or you lose the pitch that you’re trying to sing. You’ll have to focus in on these trouble spots on their own to get the whole phrase smoothed out.

Step 4: Use the real strumming pattern for the song

If you’re able to steadily do 1 beat strums on the chords while singing, you’re ready to start applying the actual strumming pattern that will be used for the song. Go ahead and put in any up strums or other unique qualities that the strumming pattern would have. Again, hopefully you’ve chosen a song that has a fairly simple strumming rhythm for your first attempt at this.

Repeat the process for other songs

It might take awhile to get the hang of doing this on the first song that you try. I’d suggest persevering and really focusing on the one particular song you’re working on until you are finally able to strum and sing through it.

Once you’re able to do that, consolidate your ability by repeating the process on a handful of other easy songs. You’ll likely find that the more you do this, you start to have a better intuitive feel for it and the process won’t take as much time or effort.

The next step would be to start trying to do this with songs that are more challenging in the vocal or guitar part.