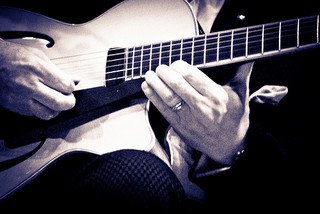 If you’re a jazz guitarist, a must know skill is how to create a walking bass line and chord accompaniment. This is very useful in any situation where you’re not playing with a bass player, whether it be accompanying a singer, horn player, or another guitarist.

In this article, I’ll go through the method on how to put together a walking bass line and chords. I’ll also give some practical advice on practice approaches you can use to develop a working ability in doing this.

Before getting started, I’ll be assuming that the reader has an understanding of a few theory related things: the patterns of the major scale up and down the fretboard, basic diatonic chord theory (or, in other words, how chords are put together based off the major scale), and some knowledge of how 7th chords are put together. Without knowing these things, it might be difficult to understand some of the things I’m going to be talking about.

At first, I’ll focus completely on how a walking bass line is formed. Once we’ve covered that, I’ll show how to add chords here and there while playing the bass line.

Along the way, you’ll need to quickly compute a way to arrive at your destination (the root note of the next chord) in a smooth and melodic way, using the number of notes you have at your disposal without playing a note 2 times in a row.

The notes you can use to create the bass line can be broken down into different categories:

Root Notes: These are your starting and ending points, so they’re of primary importance.

Chord Tones: These are the notes that are in the chord that you’re playing over. For example, if you were playing over an Am7 chord, your chord tones would be A (the root), C (the 3rd), E (the 5th), and G (the 7th). They play a very important structural part in how the bass line is formed.

Scale Notes: These are notes that are in the major or minor parent scale that links the chords together. For instance, if you were playing over a set of chords in G major, notes from the G major scale would be your scale notes. They play an important part in connecting the chord tones together.

For our examples, let’s put together some bass lines that go through a ii V I progression in G. That means the chords that we are forming our bass line over are Am7 (ii), D7 (V) and Gmaj7 (I).

In the first example, we’ll take an easy yet common situation where the ii chord and the V chord are both in the same measure. In this case, we’ll just have 2 beats (and therefore 2 notes) on each of those chords before we arrive at the I chord in the next measure:

Lets look first at a fretboard diagram showing the root notes that we are targeting:

Since we only have 2 beats on the Am7 and D7 chords, we can form our bass line by playing the root note of the chord, followed by a leading tone going toward the next chord. Here’s one possible bass line we could do: Doing a walking bass line like this over chords that last only 2 beats each is easy. Just play the root note of the chord, followed by a leading tone that’s pulling toward the next root note. Any of the leading tones I mentioned above will work, I just happened to use a flat 2nd for each chord in this example.

Here’s another example where my leading tone going to the D7 is a sharp 7th (a half step below the root note), but the leading tone to the Gmaj7 is still a flat 2nd: Now that we have more beats on the Am7 and D7, we’ll have to play more notes before reaching the root note of the next chord. We’ll have to make use of more than just root notes and leading tones.

Scale notes and chromatic notes will play more of a role in this situation. Let’s look at those root notes again, but with some notes of the G major scale filled in around them:

The general method here is to form a bass line that uses mostly scale notes and, along the way, hits as many chord tones as possible. Then, arrive at a leading tone on the last beat before the next chord begins. Chromatic notes can be used to add some bluesy character to the bass line, or to make things mathematically work out so that you can hit the chord tones and leading tone in the way you want.

Here the bass line proceeds from the root of the Am7 up to the root of the D7 going stepwise along the scale. Since there are only 3 scale notes along the way, a chromatic note is added in the 4th beat of the measure, which also functions as a leading tone before the D7. Going from the D7 to the Gmaj7, more chord tones are used. I start on the root of the D7, then play the 5th of the chord, then the 3rd. At this point, I still have 1 more beat to fill before arriving at the Gmaj7 root note. So, I go back up to the 5th of the D7, which also serves as a leading tone before landing on the root note of the Gmaj7.

In this example, I use mostly chord tones from the Am7 chord for its portion of the bass line. I use it’s root, 5th, and root again an octave higher for the first 3 bass notes in this chord. The fourth note is a flat 2nd leading tone pulling toward the D7 root note. Once on the D7, I descend using it’s root, 7th, 5th, and 3rd. The 3rd ends up functioning as a leading tone right below the root of the Gmaj7 chord, after which I hit the Gmaj7 root note.

As you can see, in both examples I used mostly chord tones, with some scale notes and chromatic notes in between, before arriving at a leading tone of some sort. That leading tone pulled toward the root of the next chord, and the process began again.

With all the mental calculations needed to create these bass lines, it can seem daunting to try and develop the ability to do this quickly and effortlessly enough to improvise a bass line through a full tune.

Here’s how I would suggest approaching this. Understand first of all that it doesn’t happen overnight, and it will take consistent work to get a functional ability going with this.

Figure out possible bass lines and write them down
Go through some common chordal situations that you find in jazz standards. Take the systems that I outlined above, and write out variations of possible walking bass lines that could be done over them. This gives you practice thinking in the way you need to when playing these bass lines, and it will start to make you see some of the different possibilities there are for common chord progressions.

Transcribe bass lines
Sit down with some recordings of standards that you know, and transcribe parts of the bass lines that are being played. This will grow your vocabulary of ideas you can use.

Slowly string together bass line phrases
Once you’ve studied bass lines for common chord situations in jazz standards like ii V I, VI ii V I, ii V i, and so on, start putting phrases together. Try to make it through a full section of a jazz tune, playing slowly and thinking your way through it.

Start playing bass lines with a metronome
Next, start challenging yourself to make it through a full section of a jazz tune while staying in time with a metronome. Set it slow at first, and gradually push the tempo higher. Once you’re able to do this, you’ll be on your way to being able to play walking bass lines.

This is the easier part. The tough part is developing the ability to play the walking bass line. Once you’ve done that, combining it with chords on the guitar is just a matter of slipping in simple versions of chords here and there.

The walking bass line itself fills a lot of space since it is continuously moving around. You don’t need to fill that much space with the chords. A quick chop of a chord here and there will get the job done. Since your fingers are mainly going to be busy playing the bass line, you’ll want to keep the chords to just 2 or 3 notes that are easy to fret.

I’m now going to go back to my earlier bass line examples and insert some chords into them. We’ll start with the first example that I had: My chord voicing for the Am7 chord is just a few notes on the 5th fret. You could fret this chord by laying your first finger flat across the 5th fret while it’s also fretting that first bass note that is played over the chord. The other bass note could be fretted with your 2nd/middle finger. For the picking hand, your thumb will be picking all the bass notes. You can use your 1st, 2nd and 3rd fingers to pick the 3 notes that are played for the chord.

I voiced the D7 more like a D9 chord because I think it sounds smoother that way, and it’s easier to play. I can still do it by laying a finger flat across the 5th fret. I would probably use my 3rd/ring finger to fret the 2 notes I’m playing for that chord. I’d fret the first bass note with my 2nd/middle finger, and then use my 1st finger to play the other bass note for this chord.

For the Gmaj7, I’m again just playing 2 notes for it. You could use your 2nd and 3rd fingers to fret these, or 3rd and 4th.

How you handle the fretting hand in these situations is up to you. You just have to search for a way to make it all work. You aren’t going to be holding down the chord portions of these examples for very long, so your fingers will be freed back up soon after playing the chord.

I often play the chords on the upbeat between bass notes, as you can see in the example. I don’t do this all the time, as that would be redundant, so every once in a while I’ll play a chord at the same time as a bass note.

Here’s the 2nd bass line example I had shown above, with chords added in. I voiced the chords the same in this example, but changed their rhythmic placement in the measure a little: Now for the next example, which goes along with the 3rd example I showed above. I’m using mostly the same chord voicings here, except for the D7. On that chord, I used the same voicing as before for the first half of the measure, but a different one for the second half. The voicing in the second half was simply easier to reach from where the bass note was at that moment.

And here’s my last example, which puts chords with the 4th bass line example from above. Just to show a little variety, I again changed the rhythms played on the chords. I slightly changed the voicings on the Am7, D7 and Gmaj7 chords, although not drastically. I’m still sticking close to what was in the previous examples.